As railway recruitment is concerned there is no direct recruitment process on the Indian railway for group B posts. it is only the departmental promot
Upcoming Railway Recruitment 2022-23: Indian Railway is the pride of India as well as a huge asset of the central government. It is counted as one of the biggest employers in Asia consisting of around 1.5 million employees. Indian Railways was established on April 16, 2353, and is controlled and operated by the Ministry of Railways. The railway is divided into 22 zones for easy management, based on location mainly East-West, North-South, and Central, and 19 RRBs which are responsible for recruitment in the railway. 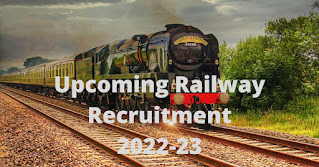 As railway recruitment process is concerned it is mainly divided into two broad categories i.e.
There are a total of nineteen railway recruitment boards (RRB) that are empowered for the employment of group C and D technical as well as non-technical staff on the Indian railway. Following are the group-wise job categorization.

A gazetted officer or Group A posts of Indian railway:
The gazetted officer rank posts are filled up by the candidates which are appeared in the open railway competitive examination conducted by the union public service commission (UPSC).but these gazetted ranks are categorized into two broad areas, technical & non-technical services.

Non-Technical gazetted post of Indian railway: These officers are responsible for the accounting & finance section of the Railways, the personnel & the security of railway property and transportation and commercial matters, etc.
Also Read: RRCSER Recruitment 2022

Group B Posts of Indian Railway:

As railway recruitment is concerned there is no direct recruitment process on the Indian railway for group B posts. it is only the departmental promotional post from Group C post.

The Railway Recruitment Board carried out the employment process for group C and D posts. There are a total of 19 RRBs who are employed for the recruitment process group C & D staff of Indian railway. The group C posts are divided into two categories
Conclusion:
As per the railway minister's announcement in the railway budget 2022-2023.there is huge railway recruitment that will explore in the coming year. So it is big news from the railway for the young railway job aspirants. So railway aspirants get ready for the fourth coming railway recruitment 2022-23.
Getting Info...

"Writing is not about accurate grammar, it's about the honest thoughts you put in it". Having a versatile writing style, Anum loves to express her views and opinion on different topics such as education, entertainment, lifestyle, and m…

Post office recruitment 2023 /India Post GDS vacancy 2023 Shreya Smart Study about this video-Friends, in this video, we have given complete inform…