After the end of 2022, team India started its new year campaign against Sri Lanka, for which Sri Lanka comes to India, where both teams will play T20 and one-day series. The full schedule and team India squad for the forthcoming home series between India and Sri Lanka was released by the BCCI. Here are the complete details of the India vs Sri Lanka 3rd T20 Match Date Schedule Timings Live Telecast and Live Score. 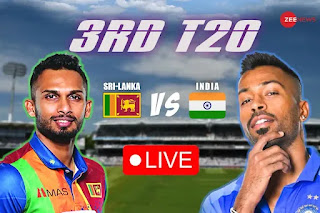 India T20 squad (playing 11 from): Hardik Pandya (captain), Suryakumar Yadav (vc), Yuzvendra Chahal, Ruturaj Gaikwad, Shubman Gill, Deepak Hooda, Ishan Kishan (wk), Mukesh Kumar, Umran Malik, Shivam Mavi, Axar Patel, Harshal Patel, Sanju Samson, Arshdeep Singh, Washington Sundar, Rahul Tripathi.
Sri Lanka T20 squad (playing 11 from): Dasun Shanaka (captain), Pathum Nissanka, Kusal Mendis (wk), Dhananjaya de Silva, Charith Asalanka, Bhanuka Rajapaksa, Wanindu Hasaranga, Chamika Karunaratne, Maheesh Theekshana, Dilshan Madushanka, Lahiru Kumara, Avishka Fernando, Ashen Bandara, Pramod Madushan, Dunith Wellalage, Nuwan Thushara, Kasun Rajitha, Sadeera Samarawickrama.
India vs Sri Lanka 3rd T20 Match Date 2023 – Third T20 IND vs SL Date
At the beginning of the year 2023, the team India and Sri Lanka played their first match on 3 January 2023, at Wankhede Stadium in Mumbai, and in this match, the Indian team was lead by the captain Hardik Pandya and the captain of Sri Lanka was Dasun Shanaka. In the match, the Sri Lankan team won the toss and decided to bowl first. After the toss, the Indian team came out to bat first, in which the early wickets of Team India fell quickly, but still in the last, the players of Team India handled the innings and scored 162 runs in 20 of the team. Deepak Hooda scored the most runs for India, who scored an unbeaten 41, Ishaan Kishan scored 37 runs, Aksar Patel scored 31 runs and Hardik Pandya scored 29 runs. After this, the Sri Lankan team, who came out to bat, also performed very well, but the top Sri Lankan batsmen were run by India’s new bowler Shivam Mavi, who took 4 wickets for 22 runs in 4 overs. In batting, Sri Lanka scored 160 runs in 20 overs at the loss of 10 wickets. India’s team won the first T20 match by 2 runs.
After winning the first T20 match, the Indian team played its second T20 match on 5 January 2023, this match was played at the Maharashtra Cricket Association Stadium in Pune, and in this match, India’s captain was Hardik Pandya and Sri Lanka’s captain was Dasun Shanaka. In the second T20 match, the Indian team won the toss and decided to bowl first. In the second T20 match, the Sri Lankan team batted first, whose start was perfect, but the bowling from India was not good and the Indian bowlers gave a lot of no balls. Sri Lanka scored 206 runs for the loss of 6 wickets in 20 overs. After Sri Lanka, India’s team came out to bat, at the beginning of which Indian batting faltered and India’s 57 runs became 5 wickets. But Akshar Patel supported the Indian team till the last over and scored 65 runs in 31 balls. In the end, Shivam Mavi also batted well but India’s team could not win the match and India lost the second T20 match. India scored 190 runs at the loss of 8 wickets in 20 overs. Sri Lanka won the second T20I by 16 runs and the 3-match T20I series was leveled at 1-1.
On 08th December 2022, BCCI shared the complete schedule from January 2023 to March 2023. The Board of Control for Cricket in India (BCCI) announced the schedule for the upcoming Mastercard home series against Sri Lanka, New Zealand, and Australia. India’s 2023, the international home season will commence with a three-match T20I & three-match ODI series against Sri Lanka in January. Here is the 3rd T20 Ind vs SL 2023 Date
Ind vs SL 3rd T20 Match Date 2023- India will play 3 T20 matches against Sri Lanka Cricket Team, where the 3rd T20 will be played on 7th January 2023, Saturday. The match will be played at Saurashtra Cricket Association Stadium, Rajkot, and will get started at 07:00 PM. where the toss of the match will be done just before the 30 minutes of the game i.e. at 06:30 PM. In the match, the Indian team will be lead by Hardik Pandya and Sri Lanka will lead by Dasun Shanaka.

Star Sports is the official broadcast right holder for the broadcasting team India;’s home tournament in Cricket. Cricket Fans watch India vs Sri Lanka matches on Television only on Star Sports Network and live streaming of the match can also be watched on the Disney+Hotstar app and website.
Ind vs SL 3rd T20 Match Live Streaming in India 2023- The Star Sports Network has the broadcasting rights for India vs Sri Lanka Series 2023. All the matches of the series will be live on Star Sports Channels. The live streaming of Ind vs SL matches is also available on the Hotstar app and Website. For this, you need to take a subscription plan for Disney+Hotstar. Live streaming is available on Disney Hotstar Super for 899/per year and Disney Hotstar Premium for 1499/per year. Matches of India vs Sri Lanka can also be watched live on DD Sports.
Getting Info...